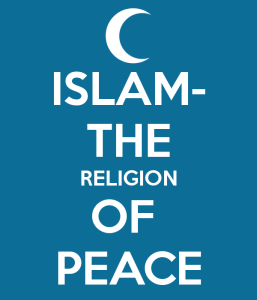 Over ages and civilizations man has searched for his identity and purpose.The seeder seeks around,

The answer is provided by the religion which is the profoundest vision man has his own place inn the world. Religion regulates the relationship between man and man. So does Islam. As a religion, it provides a conduct of living and it enables man to develop a viable society.

The word Islam is derived from Arabic word,”salama” which has two meaning i.e. Peace and surrender”. The very meaning of word Islam suggest complete submission and humanity. Islam came as a religion of peace the Prophet of Islam Muhammad (Sallah-u- Aleih Wassalam) had humanity as his pride and brought teachings the ensure peace.

Islam being a religion of peace, aims at developing society by proving institutions Zakat and Usher. It eliminates the distinctions cas, color and creed differences.The concept of peace is so fundamental and deep rooted in the tenets of Islam that it pervades and entire Islamic way of life, its laws and customs.

Tolerance is not a compulsion in the teachings of Islam. Quran says: “Let there be no compulsion in religion. Truth stands out clearly from error”.

Tolerance towards other religions was also preached by the Holy Prophet (PBUH) consistently in his sermons.

“Whoever wrongs a zimni or lays on him a burden beyond his strenght, I should be his accuser on the Days of Judgment.

“Whoever torments the zimnis tenement me”. The quality by which man be saved from devastation and total loss as illustrated by Surah Al Asar is that”

“People who beloved and do good deeds must exhort one another to truth and patience”.

Islam accorded equality to the slaves and right of inheritance was given to women as well as the right of maintenance.

To the Muslim in the west, Islam is a religion which stands for violence, intolerance suppression and discrimination against women, corruption and opposing everything which is today considers to be progressive. This is so because a creed is judged by the actions of its followers and not by what is written in their books.

Ironically some of the criminal activities are often committed in the name of Islam itself. The common man in the west is fully aware of all this through the mass media. The media forms his own views about Islam which naturally cannot be sympathetic. The clear and unified perception of Islam should be developed through the revival and institution of the devices of Ijtehad and Ijmah. Special efforts should be made to propagate the belief that there is no escape fromn through accountability on the Day of judgment. scholars should try the distortions, produced by the age old influence of other creeds and culture and misguided vested interests.

Let us hope that all these efforts would bear fruit some day and the real Islam which is liberal, tolerant, sympathetic to women the RELIGION OF PEACE would flourish in all Muslim socities in the world.