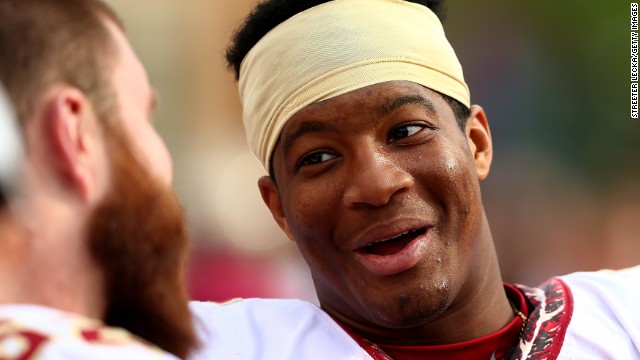 New York (CNN) — Florida State University quarterback Jameis Winston was awarded the 79th Heisman Trophy on Saturday, an honor that comes amid lingering questions about a rape allegation that has cast a pall over his claim to the coveted bronze statue.

Winston, who was considered a frontrunner by many college analysts, led the top-ranked Seminoles as a freshman to an undefeated regular season and a chance to play for a national championship in January.

“It’s a blessing. I don’t even know what’s going on right now, honestly. I’m just so happy. I’m overwhelmed,” Winston told an audience during the presentation in New York.

But even as Winston became only the second redshirt freshman to win the Heisman, questions swirled about a rape allegation made against him more than a year ago but made public only last month.
Heisman finalist finds special friendship
Lawyer: Winston case a ‘complete failure’

Prosecutors declined this month to file a charge against Winston, but a news conference by his accuser’s lawyer the day before the Heisman presentation kept fueling the story.

Asked about the case on Friday, Winston — who has maintained the sexual activity was consensual — told reporters: “I knew I did nothing wrong.”

On Saturday, shortly before being awarded the Heisman, he told the audience that he wanted people to know that he was a family man who loved his life and his college experience.

“People just got to know I love life,” he said.

Winston recorded 3,820 passing yards and 38 passing touchdowns this year. He is only the second redshirt freshman to win the Heisman. The first freshman winner came last year, when Texas A&M quarterback Johnny Manziel took the honor.

At age 19, Winston is the youngest player to win the Heisman. He also is the third FSU player, behind Charlie Ward and Chris Weinke, to claim the honor.

Winston led Florida State to a 13-0 regular season, setting the Seminoles up to take on the Auburn University Tigers in the BCS National Championship on January 6. The game will be played on Winston’s 20th birthday.

Winston’s Heisman honor comes one day after attorney Patricia Carroll called on Florida officials to investigate how authorities in the state capital handled the now-closed investigation into the alleged sexual assault of her client.

Carroll accused the Tallahassee police detective who handled the case of spending time and resources investigating her client instead of Winston.

More than half of the 248-page investigative file authorities released to her consisted of records related to her client’s telephone, social media and other records, Carroll said. She said only 11 pages of the filed contained references to Winston, and some of the material released by authorities differed from those obtained by the woman’s family.

The lawyer also questioned how investigators handled and tested evidence in the case and said authorities failed to get warrants to examine video surveillance, Winston’s apartment and other potential evidence that could have proven crucial to the case.

Earlier this month, Willie Meggs, the state attorney for the 2nd Judicial Circuit, which includes Leon County and Tallahassee, announced that Winston would not be arrested. A key factor was the accuser’s recollection of the events during the December 2012 incident, in which she alleged Winston raped her after she had been drinking with friends at a Tallahassee bar, according to Meggs.

“We have a duty as prosecutors to only file … charges if we have a reasonable likelihood of a conviction,” Meggs said at the time. “We did not feel we could meet that burden.”

The prosecutor said investigators did not have even probable cause to arrest Winston, which requires a low standard of proof.

Winston’s attorney, Tim Jansen, has said his client had consensual sex with the woman.

Florida Attorney General Pam Bondi has spoken with the head of the Florida Department of Law Enforcement about the possibility of an inquiry, but no formal request has been received, spokesman Jenn Meale told CNN on Friday.

According to police documents, the woman told investigators she had been drinking with friends at a Tallahassee bar called Potbelly’s. She said an unknown man gave her a shot glass of liquid before they left the bar. She said she did not remember much of what happened next but told investigators she remembered winding up in a ground-floor apartment, where a man took off her clothes and had sex with her despite her objections. She reported the alleged assault to campus police that night.

The woman came forward a month after making her initial report to accuse Winston, but Tallahassee’s interim Police Chief Tom Coe said last week that she “broke off contact” with investigators in February and said she didn’t want to go forward with the case.

The woman’s family has claimed that a detective had warned her attorney that Tallahassee is a “big football town” and that her life could be miserable if she pursued the case.

Carroll said the woman is not contemplating any civil litigation and is focusing on finishing final examinations at Florida State under special accommodations made by the school.

She said the woman’s sorority has been subjected to threats and has had some tires slashed.